How to foster teamwork on a leaderless team

Fostering teamwork in general can be a challenge, but how is it done on a team without designated leaders? Learn how self-managed teams leave behind conventional organizational hierarchy in favor of a world without bosses.

Fostering teamwork on a typical team is difficult enough, but how is it done on a team without designated leaders?

Self-managed or self-organized teams—whether they’re temporarily without a leader or intentionally structured that way—are becoming increasingly more common in the modern workplace, especially in the tech sector.

There are self-managed teams that operate within conventional organizations that simply don’t have a direct leader for various reasons. On the other end of the spectrum, there are massive companies like Zappos and Valve that make it their goal to create truly leaderless organizations.

For the purposes of this article, when I talk about a self-managed or leaderless team, I mean a team or organization that’s a) without a direct people manager or any one person who’s in charge, and b) a team that makes decisions and delegates workload as a group.

Let’s look at some of the ways in which leaderless teams are able to foster teamwork.

The nature of self-management is teamwork

What’s the goal of a self-managed team? According to Andy Doyle, former Head of Operations at Medium, a self-management structure “aspires to empower individual voices and avoid the bureaucracy that often accompanies traditional organizational structures.”

Depending on a number of factors including its size and purpose, the way in which a self-managed team fosters teamwork is going to be vastly different and more involved than a team with a more traditional hierarchy. Why? Because a self-managed team’s greatest benefit, a more open approach to decision-making, can sometimes be its greatest detriment.

In a typical team structure, there’s generally one lead who ultimately has the final say on team decisions and overarching strategy. On a self-managed team, this isn’t always the case.

Rather, the floor is wide open for discussion on everything from day-to-day tasks, delegating work, keeping each other accountable, all the way up to making decisions on major projects and big picture strategy. As you can imagine, teamwork is essential for self-managed teams.

Because of this, teams with a decentralized, horizontal power structure by their very nature will require rigorous debate and an almost evangelical commitment to process.

On a leaderless team, collaboration is key. A lot of collaboration. And because there’s a wider variety of opinions at play (each given equal weight, in theory anyway) there needs to be a robust decision-making process firmly in place to allow room for debate and discussion.

At Zappos, and other organizations that have adopted the Holacracy organizational structure model, that process takes the form of “tactical meetings." These meetings follow a rigid format that resembles the following:

At first glance, these meetings seem unnecessarily abstract and overly official—and they are—but they’re designed that way for a reason: to ensure that each attendee is given equal time and opportunity to voice concerns and participate without interruption. (There’s a more relaxed, though still regimented, discussion portion that takes place later on.)

Similar to scrum, which involves self-management to a large extent, tactical meetings are moderated by a facilitator who isn’t in a management role but is present to help remove obstacles in decision-making, fast-forward the meeting process, and ensure the rules of the format are adhered to by all parties.

Perhaps this makes sense at a company as large and complex as Zappos where other non-hierarchical process styles might be grossly inefficient. But what about companies whose size and organizational structure necessitates a different approach?

At Jostle, the design team is a small self-managed team within a traditionally structured company. Each member of the design team is given the job title of UX Designer and there’s no official senior or lead designer (at the time this article was published).

I spoke with two members of the team, Elliot Mah and Justin Alm, to get a sense of how their self-managed team operates. I quickly learned that their process is less informal than the tactical meetings of Holacracy, but still relies heavily on direct communication and clear articulation of ownership and ideas.

“We have a fairly diplomatic process regarding decision-making, and our team is mature enough to do a cost-benefit analysis when we’re changing anything significant. But sometimes it takes some extra work to illustrate your arguments, which isn’t necessarily a bad thing, just very democratic and sometimes slower than what other teams might be used to.”

Justin Alm, another UX Designer and author of an internal document that outlines how the design team functions as a self-managed team, explains:

“We generally use the term co-creation to describe collaboration between coworkers and teams—our internal culture of design. Because the design team works at the intersection of many projects and teams, it’s important that we discuss our capacity for taking on work with the team when making decisions about who takes on which project.”

Both Alm and Mah were quick to point out that the design team isn’t totally without leaders (their team technically reports to the CEO).

But because of the fluid nature of their self-organized team, temporary leaders necessarily emerge to lead projects and initiatives. So, how does the team decide who will lead a particular project?

“Depending on the complexity of the project and the required skill set, it may make more sense for one of us to lead a project instead of someone else. Our team projects are distributed based largely on product knowledge.”

Revolving leadership has an undeniable appeal. Each team member is given the valuable opportunity to lead a project based on their expertise and experience. This also means that roles, including transitory leadership or facilitator roles, are defined around the work at hand, not the people.

Fostering teamwork on a self-organized team therefore requires a tremendous amount of awareness, trust, and respect for each team member’s area of expertise and product knowledge.

Holding each other accountable

Revolving leadership is always in a state of flux. For example, there might be multiple interim leaders on a team at any one time, some working on other’s projects while simultaneously leading the same people on their own projects. Therefore, a self-managed team is going to need to figure out how to hold each other accountable for outcomes and performance.

How this is done will vary depending on the size and style of the organization, but for the design team at Jostle, it falls upon the team to hold each other accountable for their work.

“It’s not always the easiest thing to do but we’re pretty good at spotting each other’s mistakes and calling out consistency issues. We usually hold each other accountable by performing multiple reviews and working pretty closely with each other. Asking for feedback regularly helps with that too.”

A lot of the team’s success at self-management is the result of collaboration on the Jostle platform. The team publishes internal communications to help explain the team’s decision-making and review processes, as well as its culture. This is extra work for the team, of course, but it also serves as a valuable source of information for new hires.

Another self-managed company, The Diary, uses their Jostle platform to support and propel their teams and projects across locations globally.

Commitment to the model

The demise of self-managed teams, according to critics, is often the result of a perceived lack of accountability in a leaderless environment, as well as invisible power structures that seem to inevitably crop up and cause trouble.

What are some other threats to fostering teamwork on self-managed teams? Usually any of the following:

Although these issues are by no means exclusive to self-managed teams, they do pose a problem that can only be solved by recognizing that they might be inevitable. After all, completely doing away with hierarchy isn’t really the goal with flat organizational structures.

Another way to prevent these issues is to hire for cultural fit—that is, find people who believe in and are committed to the self-management model, and then build expectations around that commitment into every aspect of how the team operates.

This instills in the team a sense of purpose beyond their day-to-day tasks. Not only have they executed on a design project or implemented a new business strategy, but they’ve also successfully upheld the parameters they’ve set up themselves to ensure the success of their self-managed team. It’s kind of a social victory as well as a business success.

One thing to keep in mind about self-organized teams is that they’re vastly different from conventional workplace power dynamics, and consequently could require extra effort to get everyone up to speed and running smoothly. But with a robust workflow/review/decision-making process in place, revolving leadership, and group commitment to the methodology, your team will be on the right track towards fostering teamwork on a leaderless team.

Work has shifted dramatically. Help all employees be successful. 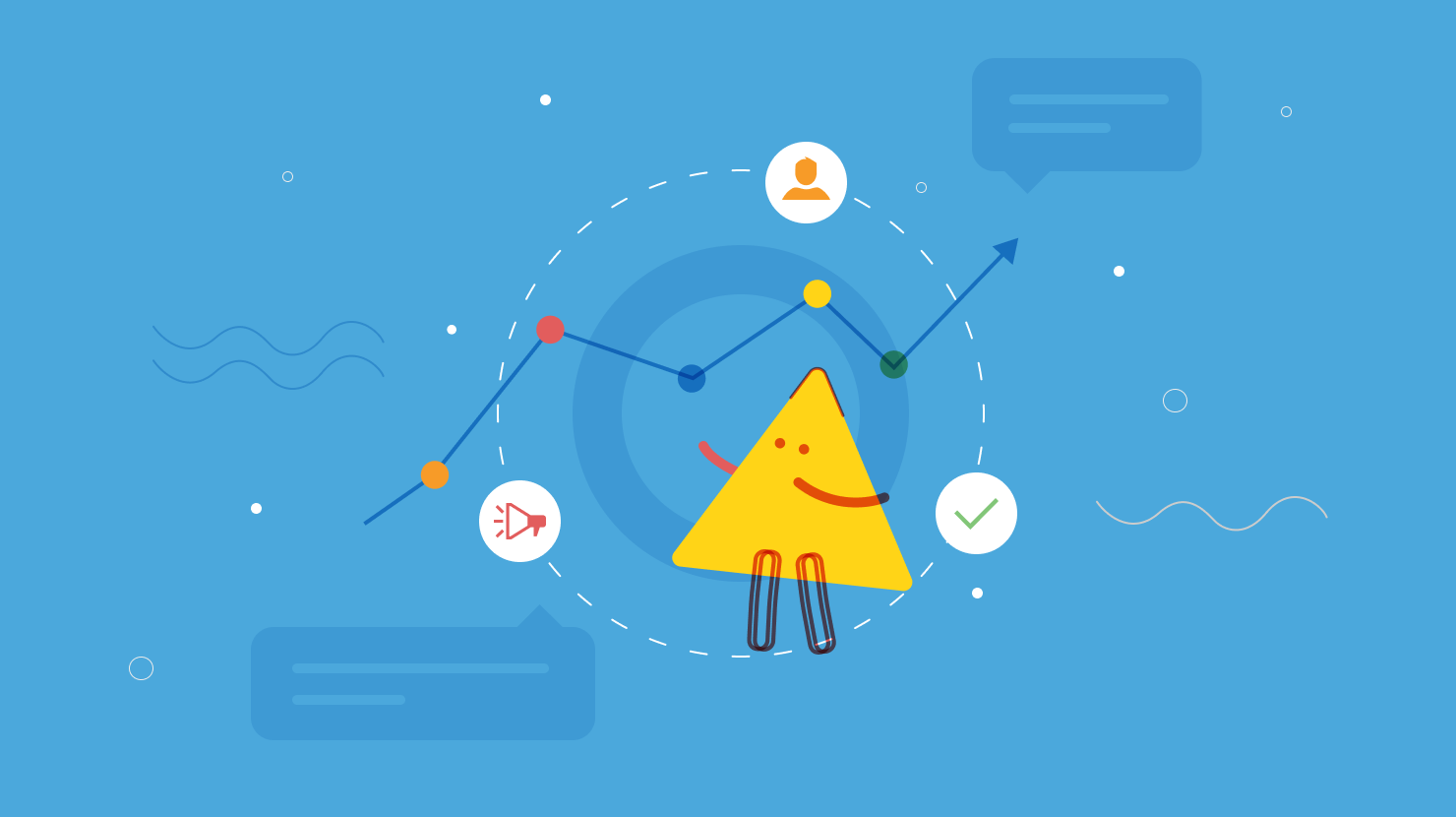 5 reasons why employee engagement is important